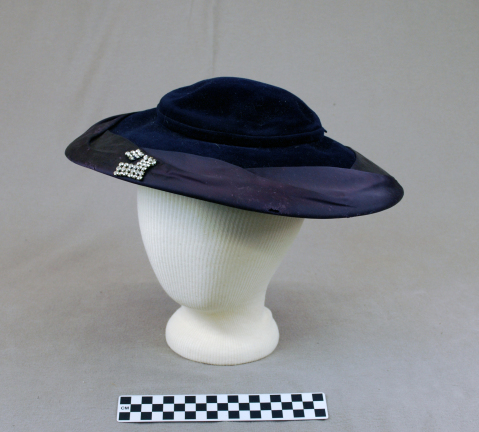 After immigrating to Texas from Prussia in 1867, Julius Joske opened a dry goods store in San Antonio. After returning to Prussia in 1873, Joske returned to San Antonio a year later with his wife and children and reopened the store. When his sons joined the business the store name was changed to J. Joske and Sons. In 1883, after the retirement of Julius Joske, the store became known as Joske Brothers. In 1903, Alexander Joske bought out his brother and father and renamed the store Joske’s.

At the time that this hat was made for Joske’s, the store carried mostly merchandise for men and boys. After an expansion in 1909, fabric and other materials were added to the store’s inventory. This gave women the option to have dresses and other apparel made for them.

Joske’s Department Store was headquartered in San Antonio with its flagship store in what is now Rivercenter Mall. Joske’s ultimately had twenty-six stores in Texas and one in Arizona. In 1939, after an expansion, Joske’s downtown San Antonio store became the first air-conditioned store in Texas. The store was hailed as the largest department store west of the Mississippi River until it was bought by Dillard’s in 1987.

Joske’s introduced the “bargain basement” in 1877 to help those with lower incomes be able to shop at Joske’s. This area of the store featured items at discount prices. Not only did the store sell goods, they also had several eating establishments which included a restaurant called the Camellia Room. In 1960, Joske’s opened a Christmas promotional area on the fourth floor of their downtown San Antonio store called Fantasyland. There was a thirty foot tall, mechanical Santa on the roof of the store that waved his hand. There was also a train ride that took children through the display. If you have ever seen the classic holiday movie “A Christmas Story,” you can get an idea of what Joske’s Fanstasyland was like in the scene where the character Ralphie and his family look at the Christmas display windows and when they visit Santa at the department store in their town.

In 1987, The Dillard Corporation of Arkansas bought Joske’s Department Stores. All the Joske’s stores throughout Texas were renamed as Dillard’s. The building that housed the flagship Joske’s store in downtown San Antonio is still being used today and is now part of the Shops at Rivercenter mall. [Kim Grosset, edited by Joscelynn Garcia]